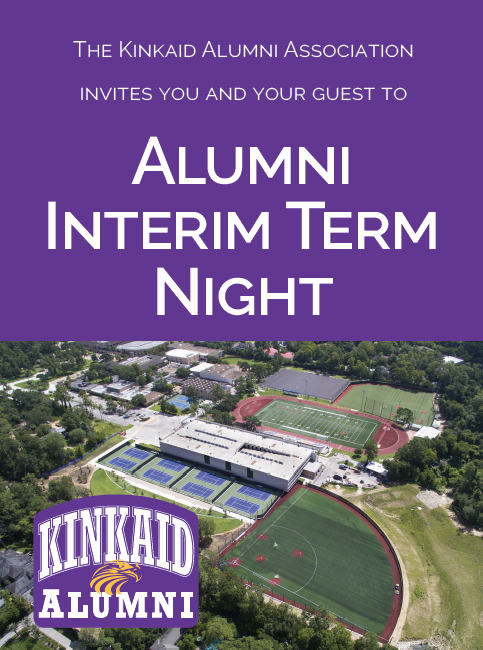 Alumni Interim Term Night is an evening of continuing education and fun for the entire Kinkaid community - alumni, parents and current and retired faculty/staff are all invited to attend!

If you are unable to register online, please contact Alumni Activities Manager Alexa Leach '09 at 713-243-5054 or alexa.leach@kinkaid.org with your session choices and credit card number. Registration closes on January 20.

*Learn about and taste a selection of great, everyday wines with a sommelier from Camerata at Paulie's wine bar.

At 1,500 acres and approximately 4 million visitors per year from 170 zip codes across the greater Houston region, Memorial Park is Houston’s largest urban park and nationally distinctive given its size, composition and cultural history. Disruptive factors like Hurricane Ike in 2008 and the 2011 drought called for a major Park restoration effort. By 2015, Memorial Park Conservancy, Houston Parks and Recreation Department (HPARD) and Uptown Development Authority (UDA) developed the Memorial Park Master Plan which includes capital improvements, ecological restoration and an operations and maintenance plan. In 2018, the Kinder Foundation’s $70 million catalyst gift gave way to the Ten-Year Plan which enables the Conservancy and its partners to design and construct significant components of the Master Plan within 10 years. In this presentation, you will learn more about the $205 million of Park improvements to be completed by 2028 as well as the Conservancy’s role in operating and maintaining Memorial Park.

With children online more than ever, it is important that parents learn about current cyber trends, predatory activity and patterns of victimization. This presentation discusses social media, live streaming, gaming, online challenges, dating apps and online dangers. Learn how to spot inappropriate content, what to watch for and review safety settings and current laws.

Marcia will teach you knife skills and cooking tips to make meal planning and dinner at home a breeze. Learn new healthy and family-friendly recipes that will help you stay on track with your New Year’s resolutions. Learn how to make Easy Cauliflower Hummus, Mediterranean Seven Layer Dip (perfect for the Super Bowl) and Easy Instant Pot Lentil Soup. MAX 25 spots

The 2020 Election: Reflections on Our State of (Dis)Union and Where We’re Headed
Dr. Ed Harris, Upper School History Chair & Teacher; Parent of 4 Alumni

Just days before the 2020 presidential primaries begin and Iowans get together to caucus, we will examine the state of American politics. We will consider the scorecard on President Trump’s presidency and the implications of the House’s impeachment inquiry for his reelection and the two parties. We will assess key congressional races around the country, which will determine the balance of power in the House and Senate. Ed will also reveal his list of the 10 most important but not necessarily obvious things that will impact the outcome of the presidential election as we evaluate the most likely paths to the presidency for President Trump and the key Democratic contenders.

Note from Ed: As I write this class description in mid-November, a week after the House began its impeachment inquiry, I am assuming the Senate will not remove President Trump from office. If that assumption turns out to be incorrect, we will have even more interesting issues to talk about during our time together!

Houston is a major city hub for sex trafficking. There are over 300,000 victims in Texas, and over 79,000 of them are children with an average age of 13. This presentation will demonstrate the risk to you and the people you love. We will discuss the warning signs and protective measures you can take at home and in churches and schools. Together, Jennifer and John have presented to 55,000+ people in person and many more online. They are now advocating to change laws and create awareness by proposing state legislation and getting in front of every Houston area parent and big industry to wake them up. Together, in an effort to wake up a community, mobilize the 4th largest city in the nation and to combat this atrocity and epidemic, is a social movement called #FightForUS!

Create a beautiful silver jewelry pendant or a pair of earrings that will impress everyone. This Beginning Precious Metal Clay Jewelry course is designed to introduce you to the amazing world of precious metal clay. You will learn basic techniques and the proper use of tools to support these techniques. The class will cover a variety of topics including constructing various forms of jewelry, creating textures for designs, and finishing techniques such as torch and kiln firing. Please, join us and discover your inner artiste! MAX 12 spots; Additional class fee for silver – $40