The Kinkaid Alumni Association congratulates our 2020 Distinguished Alumni Award honorees! Click below to read more about each honoree and click the purple button to watch videos we made to celebrate each of them. 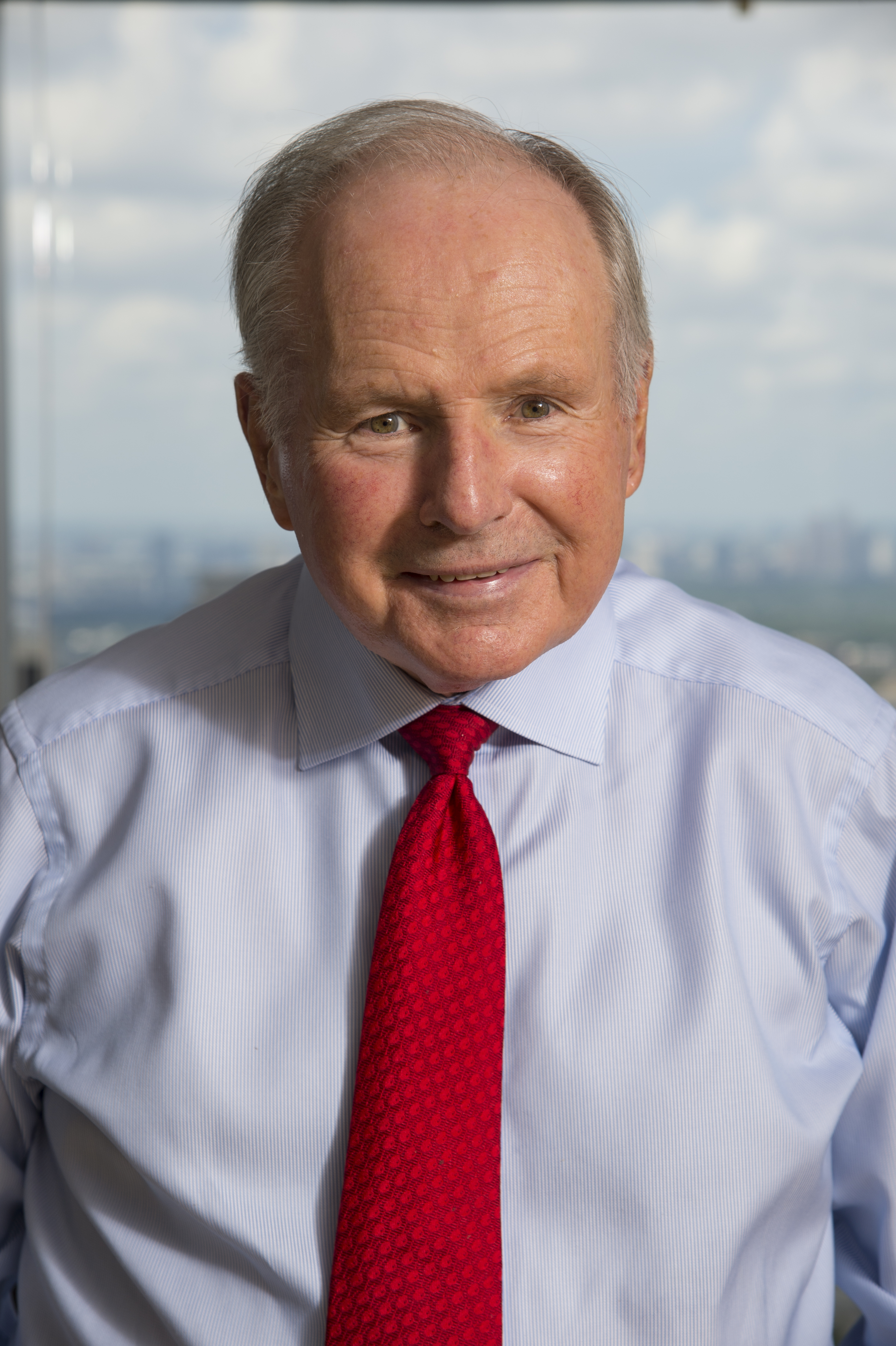 Don Sanders grew up in Mexia, TX. He graduated from Mexia High School in 1954 and then attended Sam Houston State University, majoring in photography and business. After graduating from Sam Houston, Don received his MBA the following year from The University of Texas at Austin. He then joined E.F. Hutton, one of the nation’s most prestigious investment firms, as a trainee in 1959. Over two decades, he rose to become one of its most prominent executives and a member of Hutton’s Board of Directors.

Don left Hutton to form Sanders Morris Mundy with a vision of serving clients and through the years helped finance some of the nation’s largest and most successful companies, including Browning Ferris Industries, Enterprise Products and Main Street Capital. With Don’s leadership, Sanders Morris grew into one of the largest independent wealth management firms in the United States, spanning 38 cities and boasting nearly $20 billion in assets. Don remains active at Sanders Morris, focusing on people, relationships and providing capital to help businesses and entrepreneurs realize their dreams.

Though Don has worked in the wealth management business for decades, Don has developed other interests. He has accumulated a truly unique and expansive photography collection and has also amassed one of the finest art collections in the United States, including the largest collection of George Rodrigue in the country.

Don also loves sports. In the late 1970s and early 1980s, he was the largest minority owner of the Houston Astros, where he became beloved by players across major league baseball and developed a life-long friendship with Nolan Ryan. That friendship created an opportunity for Nolan and Don and their children to work together, as they founded Ryan Sanders Baseball which today owns the Round Rock Express (the Houston Astros’ AAA Farm Club) and Ryan Sanders Sports Services also known as RS3.

Don has a long tradition of supporting area schools and has generously built a baseball field for the KIPP Explore Baseball program, as well as two Kinkaid School baseball fields and other facilities which bear his name. Don donated and endowed a world-class baseball facility at his alma mater, Sam Houston State University (known as The Don) where he was inducted into the Hall of Honor. Recently, he donated a baseball field to the University of Houston, (Don Sanders Field). In addition, he funded a life-sized bronze statue at the Baseball Hall of Fame in Cooperstown that commemorates the All-American Girls Baseball League.

Don’s tremendous love for animals led Don to Friends for Life, a no-kill animal rescue and adoption shelter where he personally financed a state-of-the-art shelter and facility. In addition, he financed BARC’s new facility, the Don Sanders Center for Cats and Kittens and the Don Sanders Cattery for Rescue Pets Movement.

Don’s biggest passion lies in his countless friends and especially his family. He is a loving husband to his wife Laura and is proud of his four children - Bret Sanders '84, Brad Sanders '89, Susan Sanders '85 and Laura; step-daughters Ashley Moore Batistick '01 and Mallory Moore Fernandez '07; and his numerous grandchildren, including Sanders Keller '15 and Chelsea Collmer '17.

Jatin "Jay" M. Vyas '85 is an Associate Professor in Medicine at the Harvard Medical School and the Massachusetts General Hospital in the Department of Medicine, Division of Infectious Diseases. He attended The University of Texas at Austin in Plan II, a liberal arts honors program. He graduated with Special Honors from the University. Jay then attended Baylor College of Medicine in their Medical Scientist Training Program where he received his PhD in 1994 and MD in 1996. He completed his PhD with Dr. Robert R. Rich in the area of Microbiology and Immunology and specifically worked on antigen presentation by MHC class I molecules. Upon completion of his MD in 1996, Jay moved to Boston to complete his medical internship and residency in internal medicine in the Department of Medicine at the Massachusetts General Hospital, Harvard Medical School. He completed his fellowship in Infectious Diseases in the Massachusetts General Hospital/Brigham and Women’s Hospital program. He then served as the chief resident in medicine for 18 months. Following a period of extended post-doctoral research training in the Harvard Department of Pathology and Whitehead Institute for Biomedical Research with Dr. Hidde Ploegh, Dr. Vyas joined the faculty of the Harvard Medical School and the Massachusetts General Hospital as an Assistant Professor in Medicine in 2007.

Dr. Vyas is internationally recognized for his work in fungal immunology, investigating how our body responds to fungal pathogens. Invasive fungal infections are a leading killer of patients with compromised immune systems (usually from cancer or being a recipient of a transplant). He has distinguished himself by applying novel imaging modalities, including optical traps and live cell imaging, to investigate the molecular basis of recognition of pathogenic yeast by immune cells. His work has demonstrated mechanistic insight into immune cell recognition of pathogens and provides insight onto how to modulate the immune response. His laboratory is supported by NIH grants, industry collaborations and private philanthropy. Jay has clinical expertise in invasive fungal infections. He has been selected as an Infectious Disease Society of America Fellow. He has also been elected to the American Society for Clinical Investigation and as a Fellow in the American College of Physicians.

In 2014, Jatin was named the 10th Program Director of the MGH Department of Medicine Residency Program, supervising 207 interns and residents. As an NIH-funded investigator with interests in basic science, Dr. Vyas provides a unique perspective to the medical housestaff. He mentors physician-scientists who aspire to impact clinical medicine through investigation. He has given talks internationally to discuss the value of mentorship.

Lisa Kaplan Rosenzweig ’00 resides in San Antonio, making her way to the Alamo City via Dallas and Austin. Lisa attended The University of Texas at Austin, earning a Bachelor of Business Administration in Finance and a Bachelor of Arts in Spanish. She is a member of Phi Beta Kappa.

Upon graduating from The University of Texas, Lisa accepted a position in Dallas with Crow Holdings, the investment office for the Trammell Crow family. In this capacity, Lisa’s real estate investment and development efforts spanned a wide range of assets throughout the United States, including hotel, land, office, retail and multi-family.

In 2010, Lisa and her husband Shawn moved to San Antonio where Lisa accepted a position with Silver Ventures to redevelop the historic Pearl Brewery into a mixed-use, urban neighborhood. From 2010 until its opening in Fall of 2015, Lisa oversaw the development of Hotel Emma, the Five Diamond, boutique hotel property within the original 1894 Pearl Brewhouse. Following the completion of Hotel Emma, Lisa led the development of Oxbow, a 300,000 square foot projected LEED Platinum office at the Pearl complex. During Lisa’s tenure with Silver Ventures, the Pearl complex and Hotel Emma received numerous accolades and recognitions.

In the spring of 2019, Lisa chose to continue her family office real estate experience, accepting a position as Director of Real Estate for MissArk Real Estate, a private family investment office. She leads in-house management and strategy of the principals’ real estate portfolio throughout the United States.

Lisa is a member of The University of Texas at Austin Real Estate Center, for which she serves on the Executive Committee. She is also active in the Urban Land Institute, having served as the local district Program Chair and a member of the national Small-Scale Development Council (Blue Flight). In addition, Lisa serves on the San Antonio Independent School Foundation Board.

Lisa entered Kinkaid in the 6th grade. Throughout her tenure, she served as a class officer each year ending her senior year as Class President. Lisa was Co-President of SOK. Additionally, she played sports each season including four years each on the Varsity Basketball and Softball teams. Lisa’s two brothers Steven Kaplan ’98 and Brian Kaplan ’04 and her sister-in-law Erin Finger Kaplan ’04 attended Kinkaid.

Lisa is the proud mother of three children - Reid, Drew and Leigh.

Malcolm Waddell ’70 received a BA in Economics and Managerial Studies from Rice University and an MBA from Harvard University. At Rice, he received the Hugh Scott Cameron Service Award for meritorious service to the Rice community. He was elected Business Manager of The Rice Thresher and President of The Rice Program Council.

In the three years between Rice and Harvard, Malcolm served as Controller and ultimately Assistant to the President and Chief Operating Officer of The Brinkmann Corporation, a small multi-product sporting goods manufacturer in Bryan and Dallas, TX. Those years with Brinkmann launched a lifelong love for entrepreneurship.

After receiving his MBA, he returned to his native Houston and over the next three years held several positions with Entex, Inc., a conglomerate best known as Houston’s natural gas distribution company. His first stint was in the corporate mergers and acquisitions group. He transferred to University Savings where he served as Assistant to the Director of Human Resources and ultimately Commercial Loans Manager. In his last year at Entex, he returned to the corporate office as Assistant to the Executive VP for Entex’s oil and gas, geothermal and oil field drilling division.

In early 1984 with his fellow Harvard and Rice graduate Tim Tarrillion, he purchased Texas Catalyst, Inc., an Alvin, TX-based catalyst handling service company. Over the next 10 years, Malcolm as CEO and Tim as COO grew this $1 million revenue operation with a single office and single service line into a $100 million revenue company with 30 offices and multiple service lines. In late 1993, Enclean, Inc., was acquired by Waste Management, Inc. Tim and Malcolm were honored as Ernst & Young’s Houston Public Company Entrepreneurs of the Year in 1991.

In 1997, Malcolm and wife Suzanne Bruce embarked on what has been a 23-year partnership when Suzanne founded Suzanne Bruce and Associates – Dermatology. Working together, Suzanne and he grew her one-doctor medical practice to a multi-practitioner office providing medical and cosmetic services and operating a site for clinical research studies that conducts trials for major and start-up national and international pharmaceutical companies.

Malcolm is a “Lifer” at Kinkaid entering Kindergarten in the opening year of the Memorial campus. In his school years, he played basketball and golf. To this day he is grateful that Coach Fred Billings plucked him from obscurity to play Varsity Basketball in his junior and senior years. Besides serving on the Alumni Board, he has been his class’ Kinkaid Magazine correspondent since 1993 and currently serves on the J. Barry Moss Distinguished Speaker Series Committee. He has also planned many class reunions, including his class' upcoming 50th Reunion. Malcolm has taught rock, soul and pop music classes at Kinkaid Continuing Education Nights. His other volunteer activities on behalf of his alma mater are too numerous to mention. He is grateful to his mom and dad for giving him the gift of a Kinkaid education. His lifelong devotion to Kinkaid is his way of honoring them and his 1970 classmates.

Malcolm and Suzanne have two grown daughters - Julianne, Guest Engagement Coordinator at the Denver Zoo, and Amanda Waddell ’06, Performing Arts Program Officer, Japan Society, in New York. Malcolm and Suzanne will be grandparents soon; Amanda and her husband Yusuke are expecting their first child in April.